The Paramount’s new production of Disney’s Beauty and the Beast has everything you could possibly want in a staged version of this show, top talent, lavish sets, gorgeous costumes, and theatrical magic that draws you directly into the story. The productions there are always well-thought-out and beautifully designed, but this one has really outdone itself on all the trimmings surrounding the familiar characters, particularly the set, costume, and lighting design.  Prepare to be dazzled by it all. 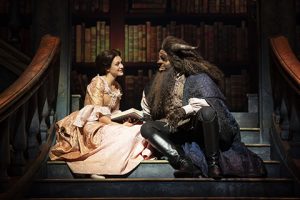 It’s one of the most well-known stories around the world, and yet, through the magic of live theatre, it’s like you’re seeing it again for the first time.  It’s the story and the music you love, but as the performers, director and all the behind-the-scenes artists put their stamp on it, it is new again.  A perfect trick to add magic to the holidays.

Belle is wonderfully portrayed by Beth Safford Laird, who has toured in the show all around the world. She has a charming take on the character that’s canon, but all her own, and she truly makes the most of Belle’s emotional journey, downplaying the Stockholm Syndrome aspects of the story, culminating in a truly powerful performance of “A Change In Me” in the second act.  Her interactions with her father, Gaston, and the Beast are all unique and feel very authentic.  Her voice is lovely, her dancing solid, and she’s just a splendid Belle in every way. 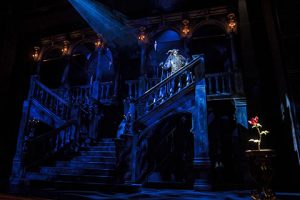 Paramount favorite Paul-Jordan Jansen, makes the Beast a bit of a drama Queen in this production, but it works. He’s not quiet or sad.  He’s angry and growing increasingly hysterical as the time ticks away and he loses even more of his humanity. He has almost a villainous take here, swirling his cape menacingly and not being afraid to be scary at first. It works well with Laird’s spunky and defiant Belle.  As usual, his awesome voice holds everyone enthralled. 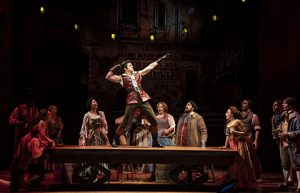 Emmett O’Hanlon is an incredibly remarkable Gaston.  Accustomed as he is to opera (having taken on the roles of Don Giovanni, Silvio in Pagliacci and Mercutio in Romeo et Juliette) he’s not afraid to be “roughly the size of a barge” in everything he does and he absolutely slays. This Gaston is truly larger than life. Paired with Nick Druzbanski’s mischievous LeFou, they are an effective comedy duo.  Druzbanski is clearly in his element with the broad comedy sidekick and has quite a few really nice moments that I don’t want to spoil.  They’re clever bits of business I’ve never seen done in other productions. 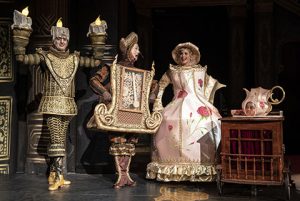 Jackson Evans as Lumiere, George Keating as Cogsworth, and Jennie Sophia as Mrs. Potts provide both the comedy relief and moral compass within the Beast’s household. All of them embody the roles with unique flair and respect for tradition. Katherine Lee Bourne as Babette also has a great deal of charm in her scenes with Lumiere, which can sometimes be tedious. Becca McCoy’s Madame de la Grande Bouche is the unexpected scene-stealing standout.  You really need to see her in action. 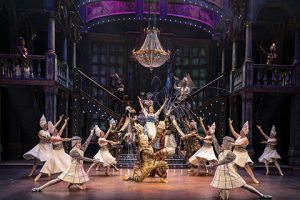 As always, the Paramount chorus delivers with superb singing and dancing, which is very much on display as they delight as the village townspeople and then again as the Castle’s enchanted inhabitants in the large numbers. They really lean in and create individual characters, even if they don’t really get named parts. Especially outstanding are Danielle Davila (who is also Dance Captain), Sara Reinecke, and Elizabeth Romero as the Silly Girls.

Everyone is always interesting thanks to Director/Co-choreographer Amber Mak. She not only gets amazing performances out of everyone but every aspect of this show lives and breathes on stage.  Nothing is dull.  Nobody is underutilized.  She makes the most of it. 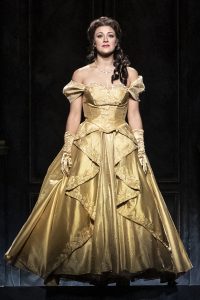 The set and lighting design is particularly good, here, too with seamless transitions from village to castle and huge amounts of drama.  Jeffrey D. Kmiec and Jessie Klug are to be commended for their vision. When magic is happening you swear it is real, though you can see the actors performing it on stage thanks to Christopher Rose’s well-thought-out work. And you can hear every note and line due to Adam Rosenthal’s sound design.

As good as everything else is, I’m maybe saving the best for last. Theresa Ham’s costumes are so utterly glorious that you just have to go see them for yourself.  Not only are they lovely fantasy takes on period dress, but the layering and textures of the fabric have to be seen to be believed.  Nothing is dull.   Everything is magical, whether it’s a village lass’s striped apron, Le Fou’s waistcoat, or Belle’s yellow gown and the Beast’s elaborately embroidered frock coat for the ballroom scene, it all has the gloriously over-the-top feel of a classic 1950s Technicolor extravaganza.  It’s what a musical should be, no understated realism here.  The Baroque-inspired take on the enchanted servants is also just superb with incredible use of metallic fabrics.

You should get your tickets now at the Paramount Box Office.  It runs from now through January 19, 2020.

“She Loves Me” Review – Old Fashioned Romance in Lincolnshire